Asano Kanesane, also spelled Kanezane, is one of the better documented swordsmiths of the Showa (WW II) Era. He was born Asano Shinichi on December 19th 1910 in the city of Seki in Mino (Noshu) Province and was apprenticed to master swordsmith Kojima Kanemichi in 1923. In April of 1930, he became an independent swordsmith and adopted the art name of Kanesane. He established a school of swordmaking in Seki and began teaching the art in 1933 when he accepted his first students, Kanetada and Michisane. He worked his entire life in Seki.

He won numerous awards for swordmaking including the silver medal in the 1934 Fine Art Exhibition, the gold medal at the same exhibition in 1935 and gold medals in each successive exhibition from 1936 to 1941 (Fuller and Gregory). He was ranked "second seat" (quasi national smith) in the 1941 newly made swords exhibition (Slough). In 1942 he received a Special Award at the last Fine Art Exhibition held prior to the end of the war. Also in 1942, Kurihara Hikosaburo, (also known as Kurihara Akihide, the founder of the Nihonto Tanren Denshujo) ranked Kanesane as Joko no Retsu at the Tosho Banzuke (trans. Jinsoo Kim). The Nihon Token Tanrenjo and Nihon Token Shinbunshi swordsmith ranking published in 1943 gave Asano Kanesane the special rank of betseki (trans. Kenji Mishina). 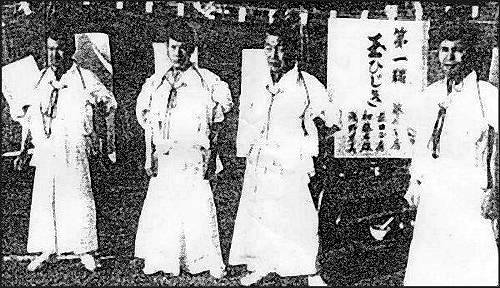 In 1942 his swordmaking school came under the direction of the army sword office. He established the East Asia Sword Company at that time to make swords for the war effort. At its peak, his sword company employed about 80 people. His sword factory produced a great number of showato during the war years. He continued to make special order swords, some of which are considered gendaito (made in the traditional manner). His swords commonly bear his personal seal (kokuin) at the tip of the nakago (the "sane" kokuin may appear on either showato or gendaito). Kanesane swords which bear a Showa or Seki tang stamp are not considered traditionally made (gendaito).

Note that the style of the mei (signature) carving varies considerably, indicting that the blades were most likely made or signed by different individuals. Kanesane's East Asia Sword Company employed numerous swordsmiths, most of whom signed their blades with a Kanesane mei and generally also used the "sane" kokuin. The presence of a Kanesane kokuin does not necessarily mean that he made the blade himself. Kanesane was basically a factory manager at this point in history and made few blades.

There are numerous Kanesane swords now in collections around the world. One must be careful to distinquish between those which were made by his East Asia Sword Company factory which are considered Showato (not traditionally made) and his special order swords or those made personally by him, many of which are considered gendaito (traditionally made Japanese swords). The quality varies enormously.

Kanesane blades can be found in standard WWII era shingunto mounts and in Showa era civilian buke-zukuri style mounts as well as in shirasaya.

Oshigata A is also shown on page 118 (3b) of Fuller and Gregory's "Military Swords of Japan 1868-1945". This reference also has an interesting letter from Kanesane concerning his sword making during the war era and afterwards. This blade was acquired from the estate of the late George Moody.

Thanks to Bill Laffoon, David McDonald, Bob McCoy, Kris Wilson, and Jeff Vassallo for providing oshigata of Kanesane and to John Borden for the Michisane oshigata.